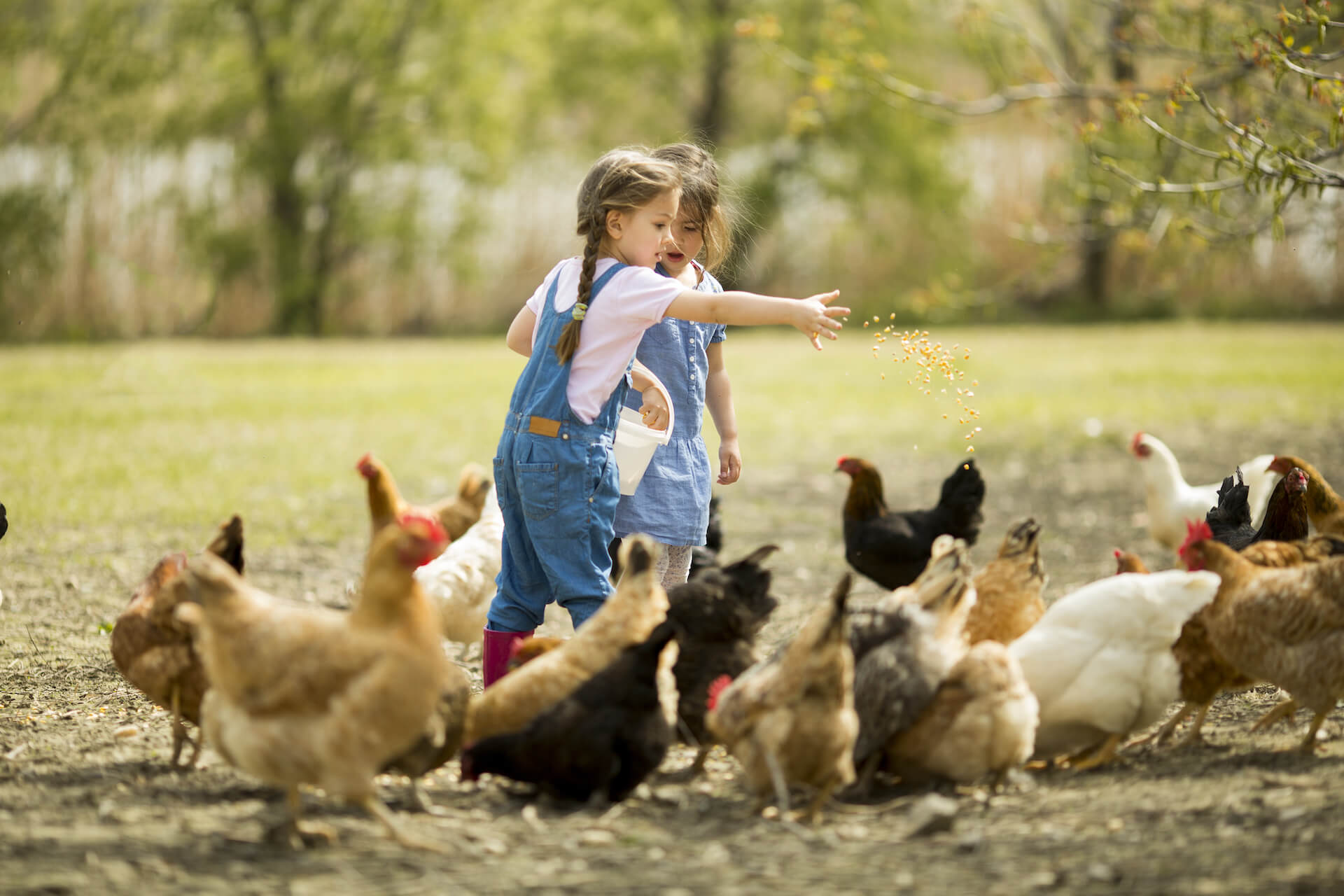 In replacement of synthetic chemicals, organic farms use more natural methods to keep pests at bay and to encourage plant health and growth. Beneficial cover crops such as legumes (like clover, vetch, and lablab) are used to protect the soil from erosion and add nitrogen back into the soil in-between crop plantings. In contrast, most conventional farms add synthetic nitrogen which has higher chances of eutrophication in our waterways (i.e. algal blooms and dead zones) causing greenhouse gas emissions.1 Fast-release synthetic nitrogen fertilisers may also increase the risk of plant pests,2 meaning the farm would in turn would need to use more synthetic pesticides to combat them.

Did you know that 80% of beef found in Australian supermarkets could be from feedlots? Feedlots are an example of intensive animal farming. They are generally used to fatten animals prior to slaughter by confining them to indoor or outdoor pens in large numbers – restricting their movement and controlling what they eat. Due to a high concentration of animals with limited amounts of space, feedlots can be breeding grounds for disease and therefore require increased antibiotic use. Hormone growth promotants may also be used in feedlots to help animals to quickly gain weight before slaughter.3

Feedlots can also be harmful to the environment. The transportation of grain to the feedlot increases the farm’s overall carbon footprint, while the concentration of animal faeces can leech into local soils and waterways.

In organic farming, most cattle and sheep are completely grass fed with minimal feeding (except in periods of drought) and feedlot finishing of cattle is prohibited. Organic poultry and pork have access to pasture and are fed organic grain mixes to complement their diets.

Organic livestock and animal feed are free from hormone growth promotants (HGPs). Currently, 40% of Australian cattle are treated with HGPs, either through hormonal implants or animal feed. There are several HGPs allowed for use in Australia, including progesterone, testosterone, and other naturally occurring and synthetic steroids.4 HGPs increase the rate at which animal muscle grows by about 10-30%.5 Through increased growth, conventional animals reach slaughter weight faster, which results in leaner animals with less tasteful meat.

Diethylstilbestrol (DES) is a synthetic form of female estrogen with the potential to remain hormonally active in meat. DES is an endocrine disrupter (affects the way your body’s hormones work) and carcinogenic (can cause cancer in humans), hence the concern about the safety of HGPs4. The European Union (EU) has implemented a full ban on all HGPs within livestock production as a preventative measure.

Over 75% of the world’s antibiotics use is for livestock – primarily as a substitute for good nutrition and hygiene in livestock production.6 Antibiotics are given both as treatment for infections and in a low concentration as a growth promotant. Antibiotics kill gut bacteria and enhance animal growth,7 and are not allowed within organic production. Low concentrations (subtherapeutic) of antibiotics in feed have been shown to increase livestock growth by 10-20%. However, they can also promote antibiotic resistance and leave residues in meat.8

Within organic farming and production, there is no need for antibiotics. Organic livestock production is less intensive than non-organic. With lower stocking densities for livestock (the number of animals per hectare), animals are free-range in open spaces, reducing the risk of disease and infection. Should an organic animal eat feed containing antibiotics, it renders them no longer organic.

Antibiotic-resistant bacteria have also been shown to evolve under beef feedlot conditions and can be readily transferred to farmland soils with potentially significant implications for human and animal health. A study by the University of New England found that fresh feedlot manure contained alarmingly high populations of antibiotic-resistant bacteria which remained in the soils treated with the same manure.9

The World Health Organization (WHO) has declared antibiotic resistance as one of the biggest threats to health, food security, and global development, raising awareness through their annual ‘World Antimicrobial Awareness Week’ campaign.10

Increasingly referred to as ‘genetic engineering’, over 70% of genetically modified (GM) crops are produced for the use of animal feed. It is important to understand that GMO crops are typically grown for the following reasons:

A long-term side-by-side study in 2013 found that pigs that consumed GMO feed in their diet had a higher rate of stomach inflammation than pigs that did not consume GMO feed, and that GMO feed is linked to digestive and reproduction problems within livestock. 11

GMOs are not allowed within organic animal feed, so the only way to be certain your animals aren’t consuming GMOs is to choose organic!

There are several reasons behind the price difference between organic and non-organic animal feed. Firstly, organic farmers pay additional organic certification and audit fees to prove that they conform to strict organic standards. It is not only farmers that must be verified. Processors, handlers, and the whole supply chain from the soil to the animal’s mouth must also be verified to the same standards.

Secondly, due to the lack of synthetic herbicides and pesticides used within organic farming, there can be increased weed and pest competition for organic crops. This additional pest and disease pressure may result in the increased loss of crops, require more manual labour, and therefore increase overall costs. Allowed inputs in organic production such as organic-approved fertilisers can also cost more than non-organic equivalents.

These additional costs make their way through the organic production chain and are incorporated into the sale price of animal feed and of organic meat.

Organic principles include the whole life cycle of an animal including its diet. When you buy certified organic meat products, you can rest assured that not only has the animal experienced the highest standard of animal welfare, it has also been fed quality organic animal feed – free from GMOs, hormones, antibiotics and synthetic pesticides.

Remember to always look for an organic certification logo, such as the Australian Certified Organic Bud logo, when buying your organic animal feed to make sure it is authentically organic.

Check out these other articles:

Watson RA (2008) Meta-analysis of the published effects of HGP use on beef palatability in steers as measured by objective and sensory testing. Australian Journal of Experimental Agriculture 48, 1425–1433.doi:10.1071/EA07174FAnimal Production Science I. J. Lean www.publish.csiro.au/journals/an

Many don’t know about the origins of the luxurious treat chocolate. To understand where chocolate comes from, we need to travel to the Equator.
Read more
Skincare is a confusing space with the term organic being thrown left right and centre. Organic Beauty is generally defined as products that contain organically grown ingredients free from pesticides.
Read more
Winemaking is the process in which wine grapes are turned into wine. But not all wine is made equal. Organic wine is made with organic grapes. Organic grape-growing and winemaking does not involve the use of synthetic pesticides, herbicides, fungicides or fertilisers.
Read more
anic textiles are grown without toxic pesticides, synthetic fertilisers and genetic modification. Lots of different fibres can be organic, such as hemp, flax (linen), jute, silk and wool. However, organic cotton is one of the most commonly used materials in fashion and textiles.
Read more
We speak to Australian Organic Limited CEO, Niki Ford, to learn more about the newly appointed Organics Industry Advisory Group and what it means for Australia.
Read more
As part of organic standards in Australia, certified organic livestock must be free to range – but what exactly does this mean?
Read more
Learn more about the organic standards that are used to certify organic brands and businesses and the certification process in Australia.
Read more
When you choose certified organic, you’re making a better choice for your health, the environment and supporting those working behind the scenes.
Read more
Do you know that in Australia there is a difference between 'Certified Organic' and simply 'Organic'? Learn more about what certified organic means including the benefits to humans, animals and the environment.
Read more
Want to start living organically but not sure where to begin? Here's a few tips and easy ways you can start living a more organic lifestyle today!
Read more